With climate effects looming, land-use planners reach for their toolbox

It’s coming soon. And it’s time to act now. Imminent climatic changes challenge planners and policy makers to forecast likely impacts and launch adaptation plans a decade or more before the worst effects are felt. With more (and better) data and tools for exploring future scenarios, planners can make land-management decisions, justify investments and map strategies for climate-change adaptation and for meeting the proposed Sustainable Development Goals after 2015, researchers said in a discussion session at the 2014 Global Landscapes Forum in Lima.

The forum was organized by the Center for International Forestry Research (CIFOR), the United Nations Environment Program (UNEP) and the UN Food and Agriculture Organization (FAO) on the sidelines of the annual UN climate change conference. It drew more than 1,700 people from 90 countries, including country climate negotiators, ministers, CEOs, indigenous leaders, civil society leaders and researchers.

Using the Brazilian Land Use Model (BLUM), planners in that country combined hydro-meteorological, spatial and economic data to predict climate-driven changes in agricultural and livestock production.

Projecting productivity changes for pasture, maize and soy from 2010 to 2030, they found that top-quality farmland in the country’s southern grain belt could decrease from 32 million hectares to between 27 million and 29 million hectares.

Even “low-climate-risk” farmland in the south could shrink between 2020 and 2030.

“That’s a spatially relevant outcome that has major policy implications for Brazil,” said Erick Fernandes, an agriculture adviser with the World Bank Group.

Overall, the country could lose as much as 10 million of its 60 million hectares of cropland, Lima said.

A farmland squeeze could increase prices for farm products, as much as doubling agriculture’s share of the country’s economy over the next decades—good news for farmers, but bad news for consumers, who would see food prices rise. It could also lead to increased deforestation to clear more land for crops, Lima said.

Planners must consider not just national impacts, but also local and regional effects on poverty, livelihoods and small farmers. Some could be mitigated by intensive use of pasture or by shifting crops to a different area, but those adaptation measures require planning and policies.

The challenge will be to transform degraded cropland and pasture, which are greenhouse gas sources, into vibrant, diversified cropping systems that serve as greenhouse gas sinks, Fernandes said.

To restore mangrove forests, it’s all in the planning 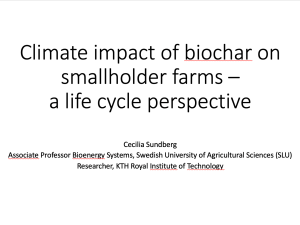 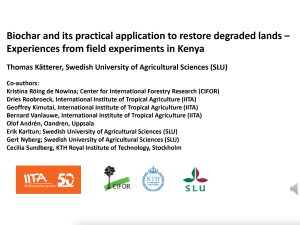 Biochar and Its Practical Application to Restore Degraded Lands: Experiences from Field Experiments in Kenya 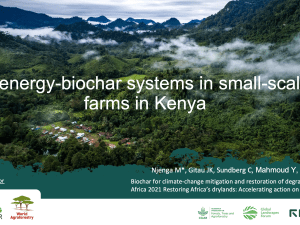