Efforts to protect the coveted Helmeted Hornbill and its habitat grow 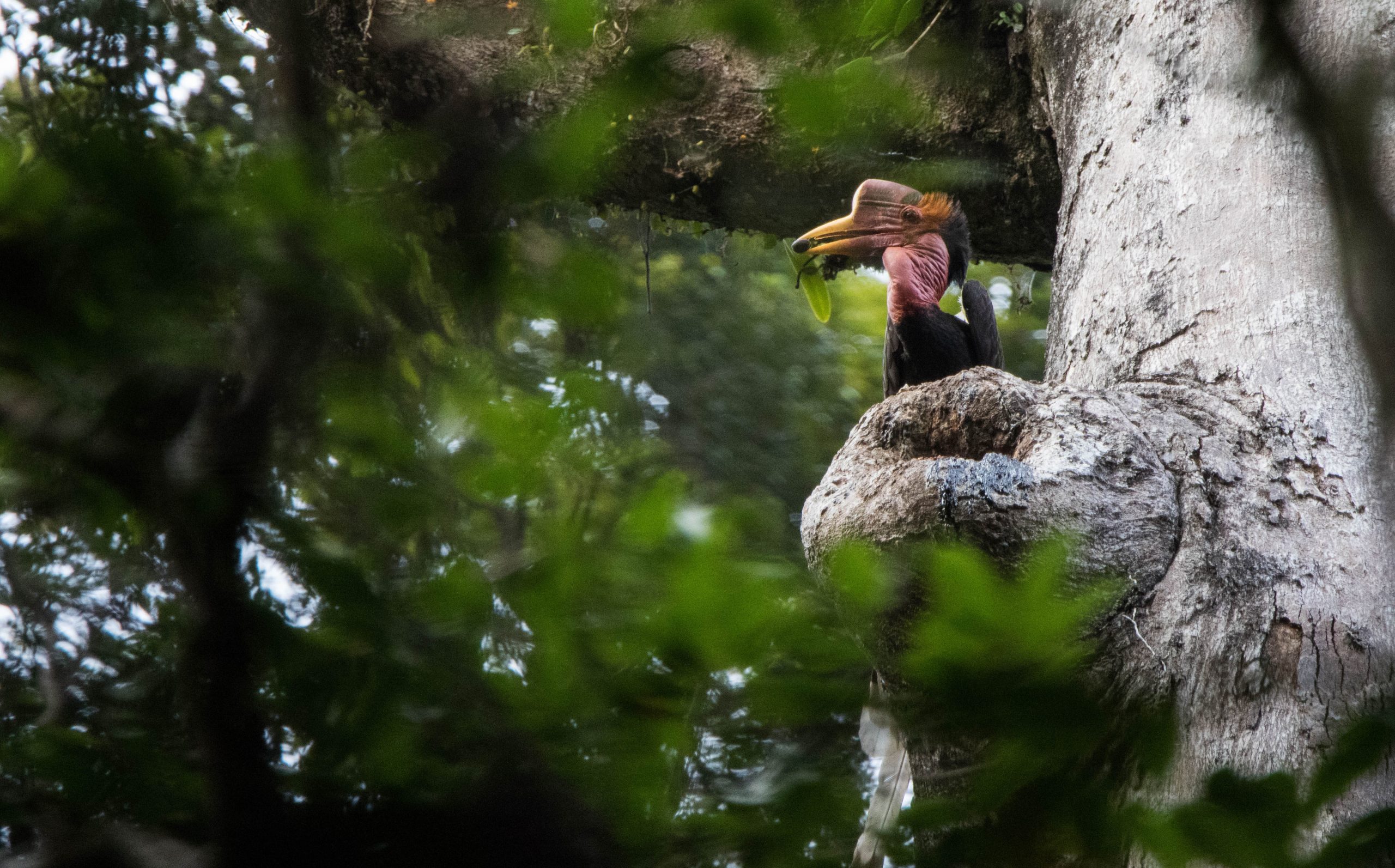 The female helmeted hornbill (Rhinoplax vigil) bird is less familiar but just as beautiful and exotic as the male, with a slightly smaller, rounder casque on its upper beak and a striking light turquoise leathery neck.

She checks out a cavity on the side of a tree trunk protruding from the canopy of Indonesia’s Kalimantan Rainforest on the island of Borneo.  She wants to see if it is suitable for a nest. Later the male comes to inspect it with her.

The bird is markedly fussy when it selects an empty cavity for nesting. She is thorough because the female of the species is trapped inside for the next six months raising her chick.

On this occasion, after they select the space, together, the life partners clean and prepare the cavity while some 40 meters below them hidden by the thick tree cover a human stalks their actions.

Luckily for them, it is not a poacher, but Rikardus, a conservationist from Planet Indonesia’s biodiversity team. He had just finished collecting data about the wildlife in the nature reserve for the day when he heard the loud and unmistakeable song of the Hornbill.

It starts with a slow-paced OOOHH before it reaches a climax of manic cackling that reverberates throughout the forest.

For a trained ear, like Rikardus’, it is possible to determine which direction the echoing calls are coming from to track the birds, which is how he happened upon this pair.

Experts and sources in the region state that this could be the first nest discovered within Indonesian’s Borneo for almost nine years.

It didn’t take long for the word to spread internationally to major news organizations such as the BBC and the National Geographic, which did an extensive series in response. Officials made the 5 km uphill hike to make sure the nest was there. The activities and the mere existence of the nest was documented heavily by a number of parties.

Interest from outsiders peaked when the nest was discovered until several months later when the chick finally left the nest, but looking after the family of Helmeted Hornbills while they were in their nest was a grueling marathon that required constant and intense attention from Planet Indonesia’s conservationists.

The trek to the nest starts with a car journey of up to six hours from Pontianak, the capital of the Indonesian province of West Kalimantan. It is followed by an hour-long bumpy motorbike ride across rocky paths, requiring the talents of locals or professional stunt drivers. Then there is a three-hour uphill hike through dense rainforest.

Planet Indonesia’s Biodiversity and Wildlife Protection Unit (WPUs) teams stuck to a rigid timetable to observe the birds for two weeks of each month. They slept at 8 p.m. each night for eight hours, waking up at 4 a.m. to reach the nest by 5 a.m., before the sun. Then, in total, the birds were observed for 11 hours each day by teams of three, stationed at different locations who recorded observations.

The observers did their work in silence and without the use of insect repellents to avoid frightening the male Helmeted Hornbill away. The male is known to abandon the nest if it senses too much danger, a death sentence for the female and her chick since they rely on him to bring them food.

Unsurprisingly, this is also when the birds are the most vulnerable to poachers. They’re an extremely sensitive bird, the wariest of all the hornbills who usually stay high in the tree canopy.

Their cautious nature means they’re extremely difficult to poach because they can sense threats from miles away. Their nesting practices however are predictably routine, anchoring them to a single tree for months – it is the optimal time for hunters to shoot down the male and steal the chick for ivory to sell on the Illegal Wildlife market.

The primary market for the birds is in China where the casque sells for five times the price of elephant ivory. In 2013, an estimated 6,000 were killed in West Kalimantan alone, in 2018 an estimated 400 per month.

At first, it seems like a straightforward scenario with a clear antagonist and victim: stop the poachers at any cost and save the birds, but conservation is never that simple.

In the nature reserves we work in the birds also face threats from local communities, where it is customary to hunt the Helmeted Hornbill for its meat and its feathers, and in contemporary times to sell.

Therefore, building a working relationship with the villagers has been central to ensure the Helmeted Hornbill family remains safe.

Now, with the support of Planet Indonesia, villagers are developing alternative and sustainable livelihoods while improving management of their natural resources by establishing community-based Conservation Cooperatives (CCs).