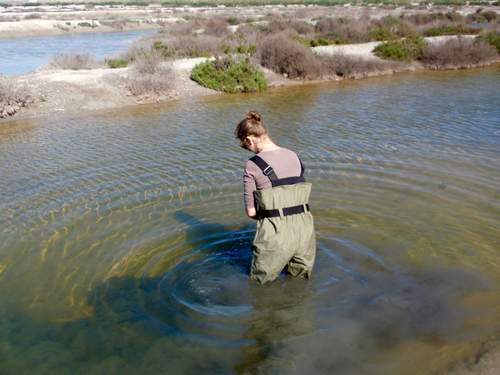 Change We Must Believe In

Hello, my name is Emmi and I’m a 30-year-old Sustainable Coastal Management graduate originally from Finland and currently living in the beautiful coastal city of Cádiz, Spain. I grew up in the United States but spent my summer vacations at a small cottage in the Finnish countryside. I swam in lakes and ran aimlessly through forests, collecting blueberries and taking naps under birch trees. But each year when I returned back to what I considered my own personal paradise, I noticed that the lake on which our cottage was located always looked just a little different from the summer before. The shoreline felt smaller, the brushes seemed to extend further and the water looked murkier.

As I got older these changes became more and more apparent. By the time I was a teenager, I began feeling let down and discouraged that I had lost my childhood wonderland. I desperately felt a need to channel my disappointment by contributing positively to society. So upon finishing high school I moved to Sweden to work as a volunteer on a 4H farm for one year. During this time I kept a blog (that has since been archived) about my experiences both living in a foreign country and working with children and young adults from all walks of life. It was then that I realised that what I wanted to do with my time was to make a difference and encourage others to do the same.

With this inspiration and my childhood summers in mind, I started a Bachelor’s degree in Marine and Coastal Resource Management at the University of Aberdeen, Scotland in 2009. Unfortunately, I slowly became disillusioned with the career path I had chosen for myself. I wanted to “make a difference in the world” but felt as though studying artificial seawall construction, hydrographic surveys and memorising environmental law statutes weren’t actions that would give me the tangible and immediate results I desired. My vision was fogged. I once again felt let down and discouraged. So, after four semesters at university, I left and embarked on what later would become a five-year self-discovery period. During this time I dabbled in several different fields and ended up teaching English at a language school in Murcia, Spain. One day, a colleague of mine took me to see La Manga del Mar Menor, a 20 km long and 200 m wide sandbar in the Mar Menor Bay along the southeastern coast of Spain. Since the 1950s La Manga has grown to be a major tourist destination and its population grows by nearly ten-fold during the summer months. As a result of reckless construction the area has suffered significantly and now faces serious environmental problems such as coastal erosion that is literally eating away at houses built only a few meters from the shoreline.

My visit to La Manga made such an impact on me that I subsequently moved to Finland and enrolled at Novia University of Applied Sciences to study Sustainable Coastal Management and finish the degree I had started in Scotland.

During my studies at Novia UAS I participated in seminars about Environmental Impact Assessments and Marine Resource Planning, made two videos on Bioeconomy as part of a student project and even participated in a three-week GIS (Geographic Information Systems) course at the University Centre of the Westfjords in Isafjordur, Iceland. As part of my Bachelor’s Thesis I studied the effect of wetland restoration and construction in capturing agricultural runoff and completed a four-month internship at the Centro de Investigación Marina (CIMAR) in Santa Pola, Spain.

Due to my success in the GIS course in Iceland, I was asked to become a GIS Student Tutor at my home university. The Bioeconomy videos provided their viewers a brief introduction and raised interest in the topic. During my internship at CIMAR I spoke to local community members about the importance of protecting marine ecosystems and to school children about why their actions also matter. The most common feedback I received was that people simply didn’t know what was going on around them or why they should care. But once they knew and realised the importance of their actions as skilled community members, voters and compassionate human beings, their attitudes changed.

My dream is to inspire change in others. I believe this is fundamentally linked to making information accessible, understandable and relatable. Resistance to change stems in some cases undoubtably from egocentricity and greed, but in many cases from ignorance and a lack of understanding. Knowledge really is power, as well as ammunition to fight those who just don’t think change is necessary.

Social media plays a very important part in my life, particularly as someone who’s lived over half of her life abroad. It is simultaneously local, national, international and global. It breaks cultural, social and religious barriers, and allows for perhaps otherwise inaccessible information to be shared. Social media lets us engage in issues that are physically out of reach. For me personally, social media not only means staying in touch with family and friends from all over the world, but also reading online newspapers, research articles, watching documentaries and learning about opportunities such as the Global Landscapes Forum Youth Ambassador Program. It brings events from near and far right to my own backyard, which is where they should be.

Having said that, it is important to approach the use of social media responsibly and wisely. The strength of social media being accessible by anyone anywhere is also its major weakness. Sometimes it can be hard to differentiate between what is true and meaningful, and what is false and misleading. I want to contribute to the former.

Sustainable, long-term environmental change is in many circumstances challenging to realise, particularly when those expected to make changes don’t fully understand the significance of their actions on a national, international or global scale. That is where the problem lies. My aim is to help communities feel as though their actions in the global development agenda are important and necessary. Change that people don’t believe in will never be sustainable. To reach this goal it is important to build a network where information and inspiration can be easily shared, and where members can be held accountable when needed. In my opinion, a strong social media network is the key to building such a community.

During the beginning of my academic career, I didn’t feel as though I was making a change in the world, so I gave up. It wasn’t until I saw the fruits of my labour come to life and realised that there are many ways to make a difference, that I began believing in myself and the importance of my actions. I want to continue doing my part to make the world a better place and encourage others to do the same. Sometimes all we need is a little push in the right direction.

Name, nationality and age: Emmi Lindqvist, Finnish, 30
Email:  emmi.lindqvist@gmail.com
Gender: Female
Country in which you currently live: Spain
Which organisation you work for, or which university you study at: Novia University of Applied Sciences
Your mother tongue: Finnish, English
Other languages you are fluent in: Spanish

This blogpost is an online application for the GLF Youth Ambassador Program. This application will be rated on the amount of comments and views it gets.
Have a look at all the other applications too!