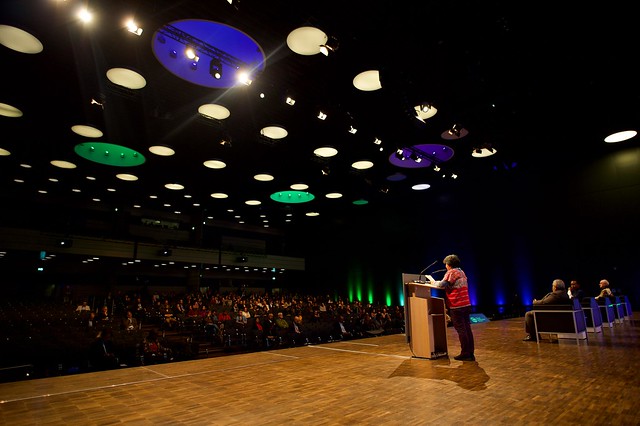 BONN, Germany (21 June 2019) – The two-day Global Landscapes Forum (GLF) conference in Bonn, Germany on 22-23 June occurs under the shadow of increasing threats to Indigenous livelihoods from the variability of climate change and the encroachment of extraction activities on their landscapes.

Evidence shows that when local communities have authority over their forests and land, and their rights are legally recognized, deforestation rates are often reduced, said Robert Nasi, director general of the Center for International Forestry Research (CIFOR), which jointly coordinates GLF with UN Environment and the World Bank.

Insecure land tenure can be a recipe for deforestation and forest degradation, he wrote in a recent opinion piece on Reuters, explaining that Indigenous communities play a vital role in protecting the environment.

“We have a very effective tool for climate-change action,” Nasi said.  “I refer to rights: land-use and tenure rights for Indigenous peoples, women, youth and local communities.”

Delegates will unite to join in creating a global “gold standard,” proposed by the Indigenous Peoples Major Group for Sustainable Development (IPMG), which recognizes that Indigenous and local communities are bearers of rights and solutions to common challenges.

“By implementing the gold standard, we can both prevent human rights violations and develop conservation and restoration initiatives that embrace the key role Indigenous peoples and local communities are already playing to protect our planet,” said Joan Carling, co-convener of IPMG. “This will pave the way for a more sustainable, equitable and just future.”

Carling is a member of the Kankanaey tribe in the Philippines and was recently removed from a government list of terrorists where she had been unjustly placed merely for speaking out on Indigenous rights. She was awarded the U.N. Champions of the Earth Award by UN Environment in 2018.

Key presenters include Vicky Tauli-Corpuz, the U.N. Special Rapporteur on the Rights of Indigenous Peoples. Like Carling, Tauli-Corpuz, also from the Philippines, was falsely accused of being a terrorist and a Communist infiltrator in the United Nations.

“When Indigenous rights are protected there is better biodiversity, forests are kept more intact and they can contribute more to climate change mitigation and adaptation,” Tauli-Corpuz told BBC Newsday during an interview ahead of GLF. A campaign against the criminalization of Indigenous peoples was recently announced at the United Nations.

Brazilian presidential candidate and activist Sônia Guajajara will speak about how she knew she would not win the election in Brazil last year – but how she achieved her real objective of promoting Indigenous rights.

For further information or to arrange interviews, please contact:

Remote interviews, photographs, video footage and other materials are also available for journalists.