A literature review revealed heavy reliance on a few key publications for identification of medicinal plant species from local or vernacular names and a lack of citation of voucher specimens in many publications. There is a need for more reliable and standardized data on the identity of species used for medicine, especially because local names vary from region to region. This is especially true in the case of medicinal roots, for which identification of species is difficult. This paper contributes to existing data on the species sold as medicinal roots (and other underground plant parts such as bulbs, corms, rhizomes and tubers) in Morocco.Methods: Data were collected in collaboration with herbalists in Marrakech and collectors in rural regions near Marrakech where species are collected from the wild. The ethno-medicinal uses of these species were also recorded.Results: We identified the vernacular names for 67 medicinal roots (by free listing) used to treat a variety of human diseases. We were able to collect and identify one or more species for 39 of the recorded vernacular names. The ones we were not able to identify were either imported or no longer available in the markets. We collected more than one species for some of the vernacular names for a total of 43 species. We identified six new vernacular names and four species which had not been previously described in the literature. Our botanical identification matched at least one of the names listed in the literature 63% of the time and did not match any species listed in the literature 37% of the time. Of the three most commonly cited pieces of literature we compared to, we found the greatest overlap with the broader, more comprehensive work of Bellakhdar 1997 (as opposed to Benchâabane and Abbad 1997 which worked in a similarly focused geographical area). However there was only 63% agreement between Bellakhdar 1997 and our botanical identifications, and 29% of the time our identification didn’t match even the genus of any of the species listed in any of the 3 most commonly cited pieces of literature.Conclusions: More rigorous methodology and reporting are needed for medicinal plant research in Morocco. This will ensure that studies are comparable, help to protect traditional medicine users from negative health effects, and, support efforts to conserve overharvested wild medicinal plants

Getting REDD to work in the Lower Mekong: lessons learned from Integrated Conservation and Development Projects 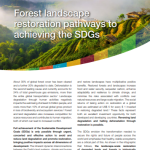 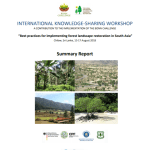 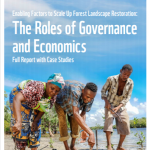 Enabling Factors to Scale up Forest Landscape Restoration: the roles of governance and economics