The murder of more than a thousand Indigenous women and girls in Canada in recent decades was genocide, according to a 1,200 page report.

The report is the outcome of an inquiry into murdered and missing Indigenous women launched by the government of Prime Minister Justin Trudeau in 2016, two years after the Royal Canadian Mounted Police said that 1,017 Indigenous women had been murdered between 1980 and 2012.

Indigenous women and girls made up a quarter of all female homicide victims in Canada between 2001 and 2015, according to the inquiry. Indigenous women and girls are 12 times more likely to be murdered or to go missing than any other group in Canada and 16 times more likely to be slain or to disappear than white women, the Canadian Broadcasting Corporation said.

“The truth is that we live in a country whose laws and institutions perpetuate violations of basic human and Indigenous rights, said Chief Commissioner Margaret Buller. “These violations amount to nothing less than the deliberate, often covert campaign of genocide against Indigenous women, girls, and 2SLGBTQQIA (two-spirit, lesbian, gay, bisexual, transgender, queer, questioning, intersex and asexual) people.”

Entrenched discrimination against Indigenous people, a failure to protect them and a legacy of violence, led to their deaths, the report titled Reclaiming Power and Place said.

“The crisis of violence against Indigenous women and girls has been centuries in the making, and its root cause is colonialism, which runs deep throughout the foundational fabric of this country,” Buller said. “Years and years of decisions and actions that built Canada, all while robbing Indigenous peoples, and especially women, girls, and 2SLGBTQQIA peoples, of their humanity, dignity and ultimately their lives. It is genocide.”

Indigenous people make up 4 percent of Canada’s population, but they suffer from higher rates of crime, poverty and addiction.

Trudeau pledged to launch a national action plan to address the findings of the inquiry. 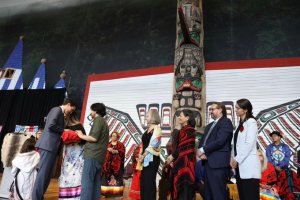 At a closing ceremony of the National Inquiry into Missing and Murdered Indigenous Women and Girls, I received the Commission’s final report. The Commission has outlined a way forward. And you have my word that we’ll turn it [into] action. More: https://t.co/TYDFYgC0Yl pic.twitter.com/oI7SjrrplO

Role of payments for environmental services in landscape approaches

Environmental organizations issue 7 policy recommendations on biodiversity and One Health

2020 and 2016 in hot competition! Plus: Veganuary, and the costliest climate disasters ever

From West Africa, here comes the next miracle grain: fonio

Food for thought: how tropical tree foods can nurture both health and restoration