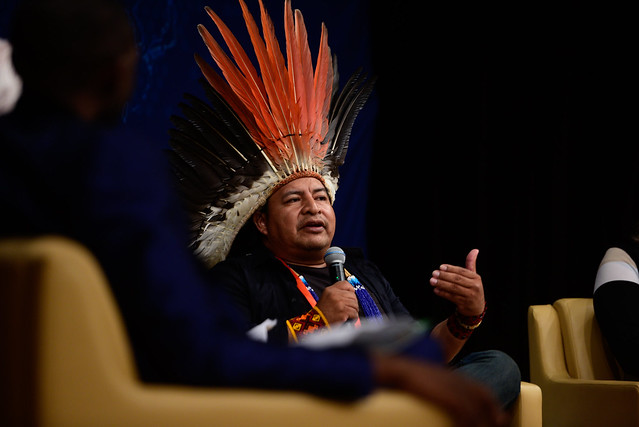 Indigenous people are always struggling to protect their livelihoods and environment, but the policies introduced by Brazilian President Jair Bolsonaro have implications for the entire world, said Chief Tashka Yawanawa, chief of the Yawanawa people.

Bolsonaro, has been criticized for his management of Brazil’s forests and his relations with Indigenous peoples. He supports opening up the Amazon to allow logging and agricultural companies to exploit its natural resources. His policies are widely recognized to have placed the future of Amazonian rainforests, the autonomy of Indigenous peoples and control over their ancestral lands under threat.

“If we continue in this kind of mentality, we’re going to have a genocide in Brazil, because we depend 100 percent on it to live,” said Tashka, who spoke at the 2018 Global Landscapes Forum in Washington.

Contrary to statements made by Bolsonaro, the Amazon does not belong to Brazil, but to the whole world, Tashka added.

“We all live in a global village, whatever we do affects each other. If I burn everything here, it’s going to affect you wherever you are.”

Fires in the Amazon have reached a record number in 2019, deforesting vast swathes of land key to protecting the planet from climate change and vital to biodiversity.

To watch the interview on CBS News, click here.

It’s not just the Amazon, we must also protect Congo Basin peatlands from fire

Indigenous people must be included in discussions about water rights, U.N. rapporteur says