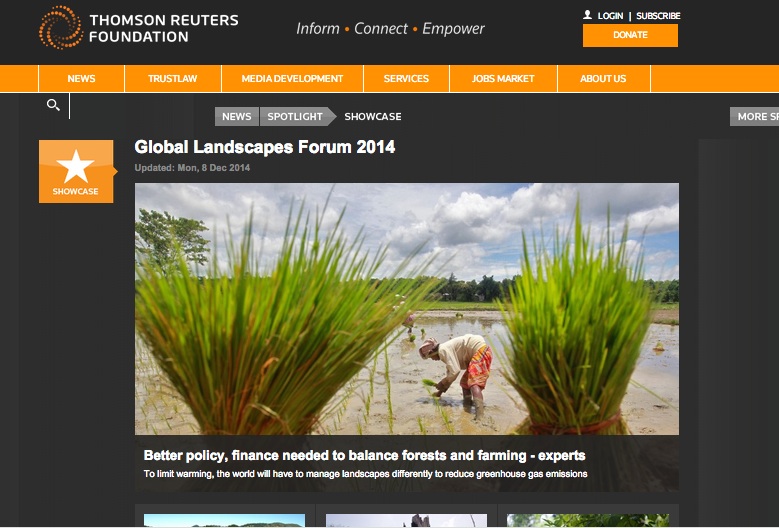 The Thomson Reuters Foundation has dedication a whole section of its reporting to the Global Landscapes Forum. Articles feature:

Better Policy, Finance Needed To Balance Forests And Farming, by Megan Rowling (also picked up by the Huffington Post)

Initiatives balancing protection for forests and other natural resources with the interests of farmers need more political and financial support if they are to advance the fight against climate change, experts said on Saturday.

A “landscapes approach” that aims to help people think more broadly about how they use ecosystems to boost food security and incomes without harming the planet has gained traction in recent years among researchers and development agencies.

But more effort is required to convince policymakers they need to put this approach into practice on a large scale, Andrew Steer, president of the World Resources Institute, told an international forum on the issue in Lima.

“It is very difficult to act in this integrated way,” he said.

Rachel Kyte, the World Bank’s special envoy for climate change, said the science is clear that the world will have to manage landscapes differently to reduce greenhouse gas emissions from deforestation and agriculture if global warming is to be limited to 2 degrees Celsius.

But “I don’t think that we have yet fully made the case successfully… that this is economically and financially possible,” she said.

Peter Holmgren, director general of the Center for International Forestry Research (CIFOR), said finance for sustainable land use must be increased, including from the private sector.

“We need to connect the large capital funds with the needs of small producers,” he said. “We need to talk trillions, not billions (of dollars).”

At the same time, the human rights and security of communities who are the stewards of forests and other natural resources have to be ensured, he emphasized.

More than 900 defenders of land rights and the environment are known to have died in 35 countries between 2002 and 2013, advocacy group Global Witness said in a report earlier this year.

In September, Edwin Chota, a well-known environmental activist and Ashaninka tribal leader, was shot and killed along with three of his companions in a remote rainforest region near Peru’s border with Brazil.

Holmgren said there was no point in promoting landscape approaches if the local people involved “still die fighting for their rights to advance (their) priorities.”

Victoria Tauli-Corpuz, U.N. special rapporteur on the rights of indigenous peoples, said the best-kept forests in her country, the Philippines, are in indigenous territories where local people have title to their land.

But globally, indigenous land rights have been significantly undermined, she added.

“Unless we reach a stage where serious government efforts are targeted towards respect, protection and fulfillment of the rights of indigenous peoples, there will be a very difficult path towards a landscapes approach” that provides benefits for all, she said.

The World Bank’s Kyte said the challenge now was to take anecdotal evidence of successful agriculture and forestry initiatives that protect people and their ecosystems – as in Brazil and parts of Rwanda, for example – and make it happen in whole regions.

That would mean aligning agriculture and forest policy, land rights and land management, and giving small farmers access to credit, among other things, she said.

Countries will come under growing pressure to do this “as water resources start to become scarcer, and the need to produce nutritious food off less land becomes more intense, and as you start to see climate volatility,” she added.

Join webinar on Wed 26 Nov & learn what landscape approaches are